More than Two-thirds of Americans Indicate Willingness to Give or Donate Part of their Income in Support of the Fight Against Climate Change
- Top choices for paying for climate change measures are government incentives, taxes and conservation programs
- Thirty-one percent say climate change is "more of a priority" in the current context of the corona virus pandemic
- Eighty-three to 90% are in favor of wind turbines on land and offshore, as well as solar panel farms, to combat climate change

NEW YORK, Sept. 23, 2020 /PRNewswire/ -- A new study of American consumers' attitudes toward climate change finds that more than two-thirds of respondents (70%) indicate their willingness to give or donate a percentage of their personal income to support the fight against climate change. 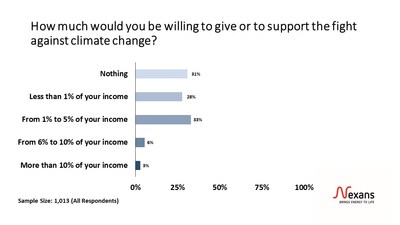 The U.S. findings are part of a series of surveys commissioned by Nexans in the U.S., UK and France, in order to determine public opinion on climate change and related issues in the wake of the COVID-19 pandemic. The U.S. study was conducted online by Researchscape from August 20 – 24, 2020. It had 1,013 respondents, ages 18 or older, with the results weighted to be representative of the overall population (variables available upon request).

Nexans, is headquartered in Paris with a major offshore wind cable manufacturing facility in Charleston, S.C. and an industrial cable manufacturing facility in El Dorado, Ark. The company is fully committed to fighting climate change and is helping to make sustainable electrification possible. The survey was developed as part of its celebration of the first Climate Day in Paris which included a roundtable event with world-renowned experts, the release of an unprecedented global study by Roland Berger on the challenges raised by the electrification of the world and Nexans' own commitment to be carbon neutral by 2030.

Paying the Tab to Address Climate Change
Participants were given the opportunity to choose from seven multiple responses to the question "How should the fight against climate change be paid for?" The majority (59%) replied it should be paid for by "government incentives for both businesses and consumers." It was followed by "federal, state and/or local taxes" and "conservation programs" (tied at 47%); "business investments" (42%) and "consumer-driven purchases" (33%). Just 9% selected none of the above and 2% selected other.

"Through the organization of this Climate Day, Nexans is asserting itself not only as an actor but also a thought leader of the energy transition for a sustainable electrification of the world. This electrification raises a number of challenges and paradoxes that must be overcome. And it will only happen with the direct involvement of the populations concerned. These surveys provide a better understanding of the level of information and disinformation in public opinion as well as their level of acceptability of these lifestyle changes," said Christopher Guérin, CEO, Nexans.

Among other findings, 44% are dissatisfied with the job that federal and state governments are doing to address climate change, 35% are somewhat satisfied and 21% are either very satisfied or completed satisfied with government's role.

In similar research conducted by Nexans in the United Kingdom, nearly two thirds (65.8%) of UK respondents said they would be willing to donate part of their salary to fight climate change. Furthermore, nearly a third (29%) of the UK's consumers believe that combating climate change has become more of a priority in light of the coronavirus pandemic. The UK research was conducted online by Savanta from August 21 – 24, 2020. A total of 2210 respondents, aged 16 and above, representative of the UK population took part.

We are Nexans.
Our mission is to be the core operational leader in the electrification of the world and lead the charge over the coming decades for clean and circular energy consumption. We believe that electricity will be the most important asset of decarbonization.

About Nexans
Nexans is a key driver for the world's transition to a more connected and sustainable energy future. For over 120 years, the Group has brought energy to life by providing customers with advanced cable technologies for power and data transmission. Today, Nexans goes beyond cables to offer customers a complete service that leverages digital technology to maximize the performance and efficiency of their critical assets. The Group designs solutions and services along the entire value chain in three main business areas: Building & Territories (including utilities and e­mobility), High Voltage & Projects (covering offshore wind farms, subsea interconnections, land high voltage), and Industry & Solutions (including renewables, transportation, oil and gas, automation, and others).

Corporate Social Responsibility is a guiding principle of Nexans' business activities and internal practices. In 2013 Nexans was the first cable provider to create a Foundation supporting sustainable initiatives bringing access to energy to disadvantaged communities worldwide. The Group's commitment to developing ethical, sustainable and high-quality cables also drives its active involvement within leading industry associations, including Europacable, the NEMA, ICF and CIGRE.

Nexans employs nearly 26,000 people with an industrial footprint in 34 countries and commercial activities worldwide. In 2019, the Group generated 6.7 billion euros in sales.