Americans Say Thanksgiving is Even More Important This Year With Planned Spending Levels Inline or Higher Than 2019
-83% of Americans indicate the Thanksgiving holiday is equally if not more important this year with at least 56% of those celebrating indicating they would do so at home
-73% are planning to spend the same or more for Thanksgiving 2020 as they did in 2019, with a quarter of consumers (26%) planning to shop early for the holiday
-80% of consumers plan to shop in-store for their Thanksgiving ingredients
-90% of Americans will celebrate indoors and 61% will celebrate with people who don't live with them

NEW YORK, Oct. 29, 2020 /PRNewswire/ -- Most Americans (83%) view Thanksgiving 2020 as equally or more important than last year, and more than half (56%) say they'll celebrate at home, according to a new survey commissioned by NCSolutions (NCS). Almost three in four (73%) say they'll spend the same or more for the holiday, while 80% plan to shop in-store for the holiday.

Some Thanksgiving tables will be set for slightly smaller crowds with 31% of Americans indicating they'll have somewhat fewer or many fewer people at the meal this year; 59% are planning for the same number of guests at their table. Only 10% say their gatherings will be larger than last year. 2020 Thanksgiving celebrations will largely take place indoors as 90% of Americans say they plan to eat inside. In addition, 61% of people say they'll give thanks this year with people who don't live in their household.

The online survey was fielded between October 17-19, 2020. It has 2,024 respondents, ages 18+, with the results weighted to be representative of the overall U.S. population (variables available upon request). NCS, the leading company for improving advertising effectiveness for the consumer packaged goods ecosystem, provides data and regular insights to brands to help them optimize their advertising outreach and achieve improved return on advertising spend. 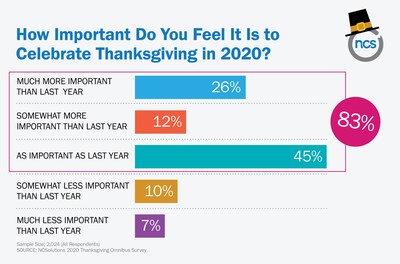 Sixty-one percent indicated they would celebrate with people who don't live with them, while 39% said their holiday meal would only be with household members. A third of consumers (34%) expected four to six people at their celebrations and 24% said their gatherings would include just two to three people. Only 12% said they expected a larger crowd of 10-12. 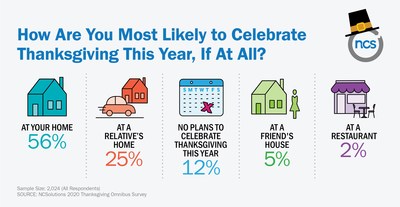 "The big takeaway for CPG advertisers is that Thanksgiving isn't canceled. Holidays are holidays even as the pandemic continues. As we've seen during this pandemic around other holidays, spending has increased since celebrations represent a bit of normalcy and remain important to consumers," said Linda Dupree, CEO, NCSolutions.

"Historically, our data shows a 7% increase in household grocery spending in the weeks prior to Thanksgiving. We are currently observing household spending on groceries to be up 24% compared to the same time last year," said Dupree.  "While the COVID-19 pandemic has been a great disruptor for many things, all indicators point to Thanksgiving 2020 being an important facet of the fabric of American family." 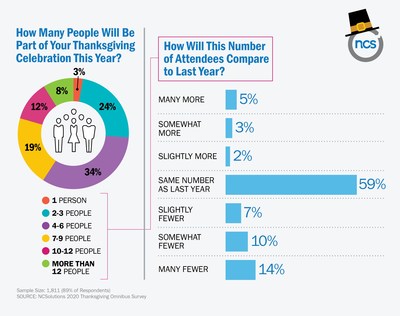 The pandemic doesn't appear to be stopping consumers from buying their goods in-store, with 80% saying they would shop that way; 19% indicating they would purchase those goods online for delivery; and 15% using curbside pick-up (survey respondents were able to select multiple responses).

Consumers selecting multiple responses indicated more than two-thirds (67%) will shop for their Thanksgiving table at grocery stores; a similar but slightly smaller number (58%) will shop at superstores; and just over a quarter (26%) at wholesale club stores.

In other good news for consumer packaged goods companies, American adult consumers indicated that their overall Thanksgiving spending in 2020 would be about the same as in 2019. Seventy-three percent of American adults said they were going to spend the same or more on the 2020 Thanksgiving celebration: 58% said they'll spend the same; more than a quarter (27%) said they would spend less; and 15% indicated they would spend more. 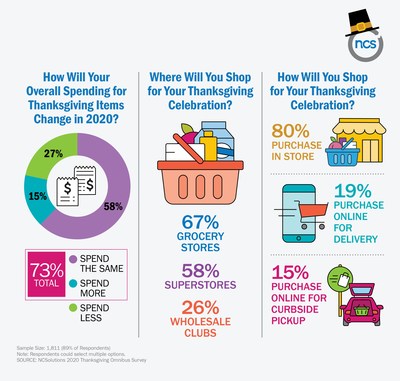 "With more Americans putting greater emphasis on Thanksgiving, the combination of the same number or fewer guests and holiday spending the same or growing should translate to an increased number of smaller gatherings and more shopping. The practical impact of these converging factors provides an increased opportunity for advertisers to promote their brands and expand audience targeting efforts to reach American shoppers," said Lance Brothers, chief revenue officer, NCSolutions.

NCS also asked consumers if the pandemic would affect the timing of their Thanksgiving meal shopping plans compared to last year. A quarter (26%) said they would begin shopping earlier; two-thirds (65%) said they'd start their turkey day shopping at the same time as last year; and 9% indicated they would do their celebration shopping later.

Americans indicate they'll stick to the standard items from prior Thanksgivings, but nostalgia will also play a role in purchase decisions. Survey respondents, able to select multiple answers, indicated they would purchase products they typically buy (68%), foods that remind them of their childhood (34%), name brands (31%), healthy foods (30%), store or generic brands (29%) and products new to their household (10%). 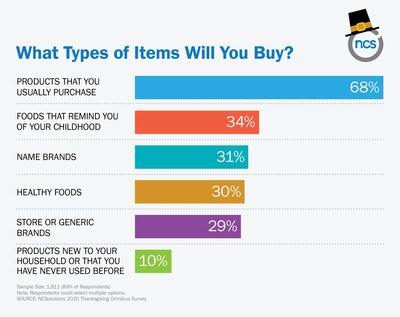 In terms of which media they would turn to for Thanksgiving cooking ideas and related advice, a category where consumers could select as many responses as they wished, the top five responses were go it on their own (41%), cooking websites (33%), social media (26%), how-to videos (20%) and TV (18%). 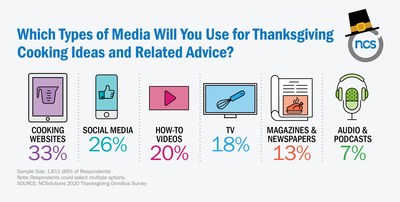 "For CPG brands, it's not too late to amplify their holiday advertising—perhaps even in the media Americans will turn to for Thanksgiving cooking ideas," continues Dupree. "Boosting creative campaigns through audience targeting that speaks to nostalgia or targeted to reach their brand loyals or those who plan to try a new product (10%) are effective strategies, based on this just fielded research, to up advertisers' Thanksgiving promotion game."

Turkey Remains the Favorite; Brussels Sprouts Not So Much

The survey also asked consumers to weigh in on their favorite – and least favorite – Thanksgiving dishes. 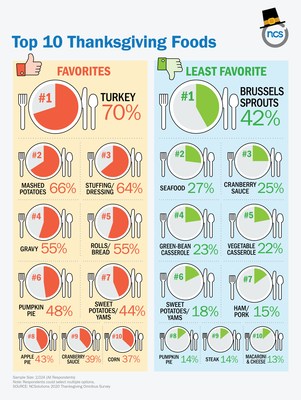 ABOUT NCS
NCSolutions (NCS) makes advertising work better. Our unrivaled data resources powered by leading providers combine with scientific rigor and leading-edge technology to empower the CPG ecosystem to create and deliver more effective advertising. With NCS's proven approach, brands are achieving continuous optimization everywhere ads appear, through purchase-based audience targeting and sales measurement solutions that have impacted over $25 billion in media spend for our customers. NCS has offices in NYC, Chicago, Tampa, and Cincinnati. Visit us at ncsolutions.com or to learn more.