For Half Of Americans, Seeing A Product Image Motivates Them To Buy, According To A New Consumer Sentiment Survey
Pinterest, NCSolutions Announce New Insights for Driving Return on Ad Spend and Incremental Sales Using Visual Discovery at Advertising Week New York

NEW YORK, Oct. 19, 2021 /PRNewswire/ -- Visual discovery – even when it's in the form of advertising – drives purchase decisions. Nearly half (49%) of Americans say product images influence their purchases of consumer packaged goods (CPG), while almost three-quarters (74%) say images in search results are very or extremely helpful in determining which products to buy, according to a new consumer sentiment survey commissioned by NCSolutions (NCS). The findings were released as part of a joint session held at Advertising Week NY with executives from NCS and Pinterest.

According to the September 2021 survey, nearly one-third (32%) of consumers use Pinterest to find inspiration and 30% have purchased a product after seeing it advertised on the site. In addition, 45% of Americans think it's extremely important to see an image of what a meal or dish will look like when it's fully prepared. 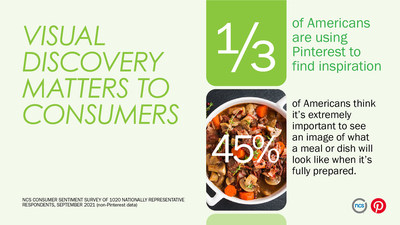 "On Pinterest, advertisements are content. They don't interrupt and they aren't a distraction," said Andrew Knoop, Partner Measurement & Insights—Food & Beverage CPG, Grocery Retail Vertical Lead in the U.S. for Pinterest. "They're a decision-making tool for Pinners. Visual discovery provides them with the information they need to make ideas happen."

"The uniqueness of the Pinterest platform is in the mindset of users and the actions they take when engaging with content. Pinners engage with content across all sorts of categories and interests, some that may be adjacent to each other, in a way that encourages discovery," said James Yoon, Head of Partner Measurement & Insights—CPG, Automotives, Restaurants, Media & Entertainment in the U.S., Pinterest. "They can move fluidly from one category to another in a non-linear (relative to the traditional marketing funnel) way until they buy something. This is what we call discovery leading to action, and it happens 100% visually on the Pinterest platform."

"Publishers, like Pinterest, use insights from NCS Meta-Studies to dive deep into how brand campaigns perform on their platform, giving them a set of best practices they can share with brands to help them deliver even more effective advertising," said Lisa Kerins, VP Publisher Sales and Consulting, NCSolutions. "This Meta-Study provides invaluable insight into key elements of Pinterest CPG campaigns proven to drive higher ROAS — ad impression frequency, qualified reach and creative elements."

In the Advertising Week session, NCS and Pinterest shared best practices that CPG advertisers can leverage to maximize return on advertising spend (ROAS) and bottom of the purchase funnel action on Pinterest including these three: 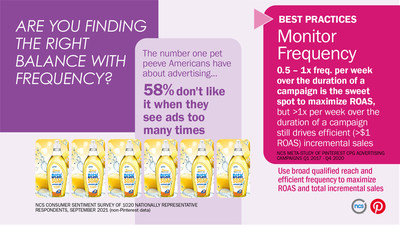 "For most CPG brands, transactions happen predominantly in off-line channels, which is why the NCS-Pinterest relationship is critical to proving efficacy and driving learnings for our CPG brand partners. We rely on NCS to close the online-offline loop at the point of sales," said Yoon.

To learn more and read the best practices in full download more information on our site.

ABOUT NCS CONSUMER SURVEY
The findings are from a newly commissioned consumer survey by NCSolutions (September 2021). It is nationally representative with 1,020 respondents. The survey was weighted by age, gender, region, educational attainment and other demographics to accurately represent the overall U.S. population.

ABOUT THE NCS META-STUDY
The NCS Meta-Study of Pinterest advertising campaigns for CPG brands consists of a multi-year meta-analysis of 85 CPG campaigns across a broad range of categories including beauty/grooming, beverage, food, personal care/OTC and pet food that all ran on the Pinterest platform.

ABOUT PINTEREST
People around the world come to Pinterest for inspiration. Pinterest is a visual inspiration platform where people find inspiring creators, shop new products, and seek out ideas to take offline. People have saved nearly 300 billion Pins across a range of interests from creating a home office, cooking a new recipe to finding their next vacation destination. Headquartered in San Francisco, Pinterest launched in 2010 and has more than 450 million monthly active users. Available on iOS and Android, and at pinterest.com.

ABOUT NCS
NCSolutions (NCS) makes advertising work better. Our unrivaled data resources powered by leading providers combine with scientific rigor and leading-edge technology to empower the CPG ecosystem to create and deliver more effective advertising. With NCS's proven approach, brands are achieving continuous optimization everywhere ads appear, through purchase-based audience targeting and sales measurement solutions that have impacted over $25 billion in media spend for our customers. NCS has offices in NYC, Chicago, Tampa, and Cincinnati. Visit us at ncsolutions.com to learn more.